Changes, Nothing But Changes

Posted on October 5, 2016 by Lynn Kilmore | Comments Off on Changes, Nothing But Changes

Seven months ago I came to the realization that if I didn’t make massive changes to my life, my family and I were going to end up in deep trouble.

Aging parents thousands of miles away … a housing market that never truly recovered from the 2008 housing crash … an anemic employment market … a school system starting to unravel … etc etc etc.

So when it became clear back in March 2016 that the housing market in my neighborhood finally had a pulse, I knew we had to sell ASAP and move closer to parents while the chance to seize this opportunity existed.

Better to to take action before a crisis hit.

So I just spent six months doing a 2,000-mile relocation of our family on short notice. For most of that time I worked non-stop from 6am to 10pm, seven days a week.

The writing (obviously) slowed down to a trickle. It’s my only regret in doing this relocation so fast. But it was worth the price, because the worst of the move is over.

Now I’m rolling up my sleeves and tackling the writing side of things. So after months of quiet from me, things are about to get noisy.

Comments Off on Changes, Nothing But Changes

The Passage into Autumn

Posted on October 7, 2015 by Lynn Kilmore | Comments Off on The Passage into Autumn

Autumn has finally returned here in the Southwest, and we can feel the passing of summer into winter. The harvest and roasting of green chile is almost over, and the leaves have begun to brown along their edges on the trees.

If all goes well, there will be one more burst of blooms from the trimmed rose bushes, and then they’ll go to sleep for the winter.

Some of you already know that the print edition of Cubicles, Blood, and Magic is a finalist in Science Fiction & Fantasy for the 2015 New Mexico-Arizona Book Awards. (The lists are a great way to find authors and publishers located in the Southwest to take a closer look at.)

I’ve been offline almost completely these past two months as I wrestle with the last 1/3 of the sequel novel to Cubicles, Blood, and Magic. What makes it so awkward is that I feel as if I’m collaborating with an earlier version of myself. The novel was started and the first draft finished back in 2013, then got derailed in the editing process due to severe illness and other difficulties.

Health-wise I am finally whole again. So things should get moving rather quickly as autumn passes into winter. I’m excited by what is to come.

I am not the same writer I was back in 2013. I’ve changed. A lot. So most of the sequel got rewritten this year from the ground up … but stays true enough to the 2013 version to not be a complete break from the past.

Book three in the Dorelai Chronicles will be where I can start with a clean slate from the first page.

So now, as the seasons pass from one extreme to another, is a good moment to pause, look around, and enjoy the change in the flowers, grass, and trees. Some parts of the world are waking up, and some are going to sleep. Whichever way it is, may it be wondrous to watch.

Comments Off on The Passage into Autumn

Print Editions in June and New Stories on the Way

Posted on June 11, 2015 by Lynn Kilmore | Comments Off on Print Editions in June and New Stories on the Way 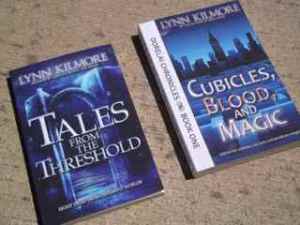 Hello! I hope you all are having a terrific June.

I’m happy to announce that print editions of Tales from the Threshold and Cubicles, Blood, and Magic are being released this month. I got two of the first print copies, and they look great.

These print editions are important for another reason–they had to be done before new novels of mine could be published.  From now on, my new releases will be in both e-book and print formats.

The sequel to Cubicles is up next in the pipeline … as well as a surprise.

Oh, and I’ve sold a science fiction short story to a respected market, and it is scheduled to be published this year. More on that once it gets closer to being available.

Also, a short story in the Dorelai Chronicles universe,  A Maze of Cubicles, is  available to download for free from various e-bookstores.

Rajah Shows Off His Food Bowl

Posted on July 16, 2014 by Lynn Kilmore | Comments Off on Rajah Shows Off His Food Bowl

Our cat Rajah loves to show off his food bowl to anyone who visits us. Today he made it clear that he wanted me to take a picture of it so that he could show it off to the internet as well.

This is a cat who hates to dine alone. Hates it. He will beg anyone in the house who will listen to him to come with him to his food bowl to watch him eat.

He will look over his shoulder to make sure his guest is still there, and if you are rude enough to wander off before he is done eating, he will chase you down and insist with loud meows that you go back.

After today, my posts with pictures will become much more infrequent. The changes to Lynn Kilmore as my pen name were crashed through for the 2nd edition ebooks during the last two weeks (instead of taking 3 months as originally scheduled), and it’s now been pointed out to me that my blogging is taking time and energy away from finishing the edit to the sequel for Cubicles, Blood, and Magic. I need to get cracking on finishing the latest round of editing on that manuscript and turn it in.

So there will be pictures … just less frequently.

Comments Off on Rajah Shows Off His Food Bowl

Well, it’s turned out that various changes got pushed through during the 4th of July weekend. Second editions of A Maze of Cubicles and Tales from the Threshold will begin appearing in e-bookstores later this week. We hope to get JPEGs of the updated covers to post here soon.

Also, various short stories that will not be converted over to the Lynn Kilmore name are starting to get pulled down by some vendors now. I’m told it’ll take a few weeks for them to go off sale everywhere, but it has begun this month so that they will be no longer available by September 1st.

We’re going to try to get things updated here on the website so that most of the dead links for those short stories get removed. My apologies for any dead links you encounter.

Next up, a post about KC. Stay tuned, Lynn

Posted in A Maze of Cubicles, Dorelai Chronicles, Green Grow the Rushes, Just One Date, King of All He Surveyed, Lynn Kilmore, Parallels, Shade Town, Tales from the Threshold, The Enchantment of Coyotes